When will Liverpool win the Premiership?

It’s still January but Liverpool are already 16 points ahead of the chasing pack in the English Premier League. This been a phenomenal season for Jürgen Klopp’s team so far: 21 wins out of 22 games. No defeats. They even have a game in hand over their nearest rivals Manchester City and the club’s position look unassailable. So it might seem a little strange to claim that Liverpool’s NPS is -45%. Yes, that’s a Net Promoter Score of MINUS 45. It’s true. Sort of.

Liverpool have been English champions 18 times but have never won the Premiership. The last time they won was way back in 1990 when the old First Division had a lot more teams than it does today. Three decades on, the discussion is not around whether Liverpool can win the Premiership this season.

The question being posed is when? And with how many games to spare?

Honestly, it really is Minus 45. Well, sort of.

Last weekend, Liverpool beat Manchester United 2-0 in a game that was far more one-sided that the final scoreline suggested. 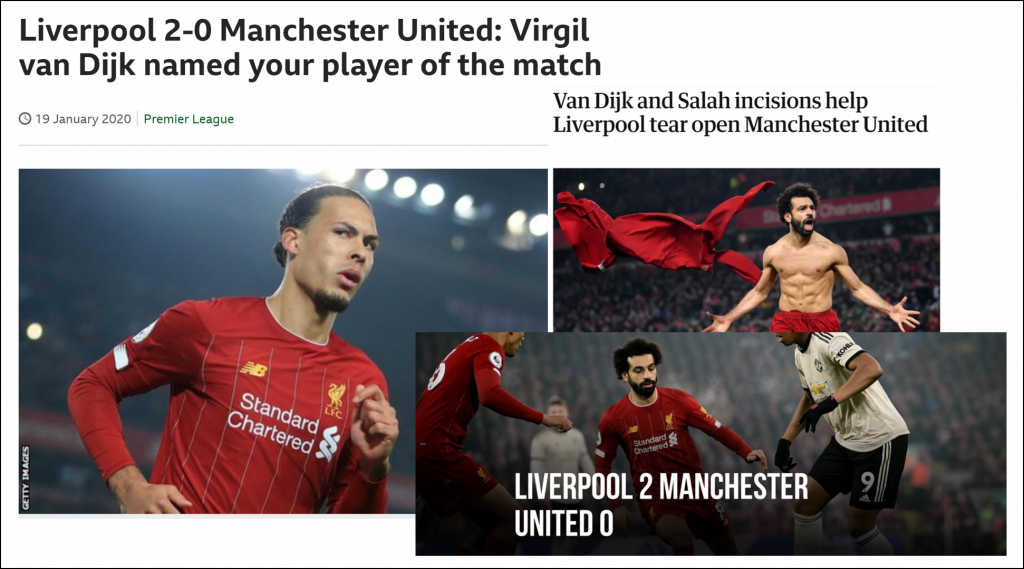 Dave Hytner of the Guardian was in no doubt about the emphatic nature of the victory:

“This was a game in which Liverpool’s superiority was so pronounced for most of the first half and the early part of the second it would have been no surprise had they led by five or six. The intensity of their football coupled with the surgical nature of their incisions were enough to take the breath.”

Now here’s the interesting thing, and the central point of this blog.

Given the imperious nature of Liverpool’s victory over Manchester United, one might think the Guardian would give all the Liverpool players ratings of 9/10 or 10/10 for their performances. Absolutely not. In the UK – in fact, all across Northern Europe – we just don’t do that. It’s not in our nature. Our internal scoring mechanism doesn’t allow it. We are conditioned to reserve 10/10 ratings for performances in the Superhero category. Excellence just gets you 8/10.

Alisson: A watching brief for much of the first half, busier but never truly troubled in the second
6 (Remember that 6/10 is a ‘Detractor’ in NPS terminology)

Trent Alexander-Arnold: Prevented from getting forward as often as he likes to, usually by United’s split-striker tactics
6 (Detractor)

Joe Gomez: Another solid performance as the junior but now regular central defensive partner to Van Dijk
7 (7/10 and 8/10 are ‘Passive’ scores in NPS terminology)

Virgil van Dijk: Headed in an opener against the early run of play, and marshalled the backline in style
7 (Passive)

Andy Robertson: His usual influence was muted in the first half before normal service resumed after the break
6 (Detractor)

Alex Oxlade-Chamberlain: Something of a passenger in first half, his substitution was little surprise
5 (Detractor)

Jordan Henderson: His energy kept his team driving forward, hit the post early in the second half
8 (Passive)

Georginio Wijnaldum: Had a goal disallowed for offside and his darts from deep wreaked havoc on United
7 (Passive)

Roberto Firmino: Had a goal disallowed by VAR, and he is still yet to score a goal at Anfield this season
7 (Passive)

The best ranking went to Jordan Henderson who only managed to get 8/10 from the Guardian correspondent. Even goal scorers Virgil van Dijk and Mo Salah could only manage a paltry 7 out of 10.

11 Players; None achieved a score consistent with a ‘Promoter’ ranking of 9 or 10s; Six Passives (scores of 7 or 8) ; Five Detractors (scores of 6 or below).

Cultural Differences from Country to Country

I have written before about how benchmarking needs to be conducted carefully when you compare scores from customers in different countries.

I have also written about how people in different countries are culturally programmed to score in particular ways. The most obvious example is that Americans are more prone to score more positively than Europeans if they receive a good service.

This is an important point to remember if you are running a Customer Experience (CX) programme across a global client base. An average NPS score for Northern European B2B customers is no higher than +10. For American customers, it’s more like +20 or +30, a score that would be seen as ‘excellent’ in a Northern European context.

So be careful when comparing NPS scores across different jurisdictions. If it helps, just remember that Liverpool’s NPS was -45% in a year where they ran away with the Premiership title!

I am happy to say that following their 4-0 demolition of Southampton yesterday, Liverpool’s NPS score has improved to -9 (MINUS 9).